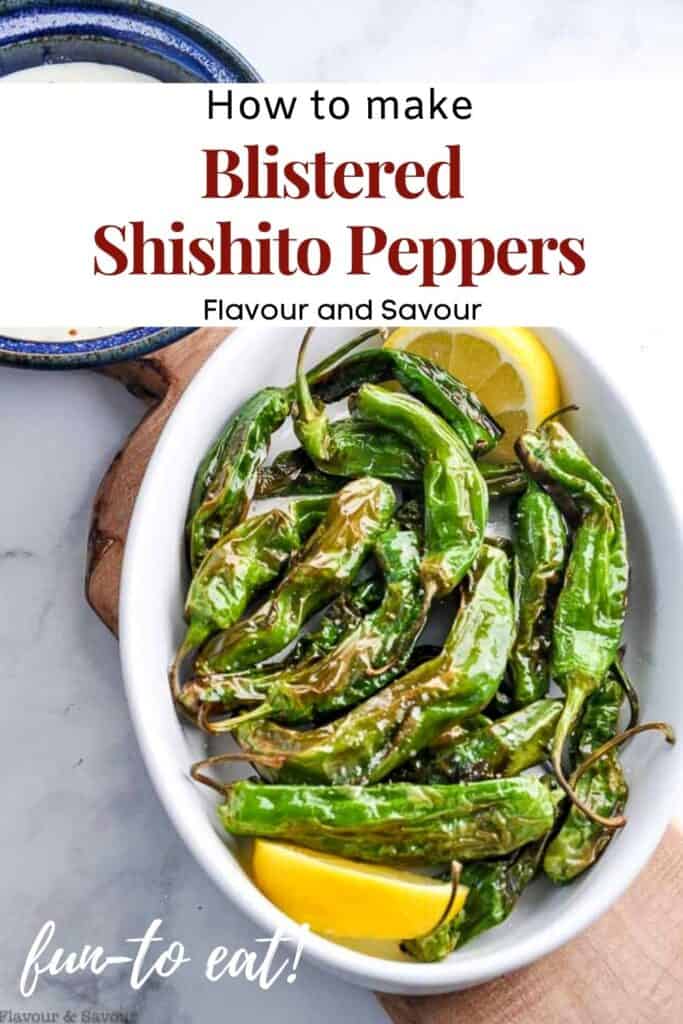 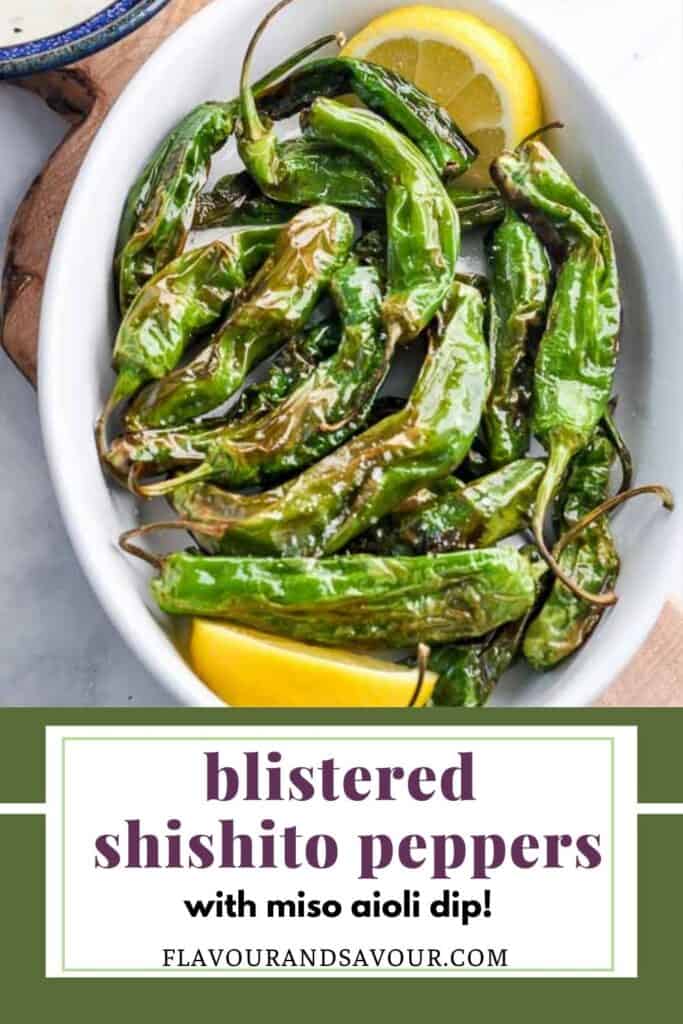 If you haven't tried Japanese Blistered Shishito Peppers, you're in for a treat! Tossed with lemon and sprinkled with flaky salt, or served with Miso Aioli Dip, these will be devoured at your next party. A fun-to-eat appetizer that takes less than 15 minutes! Keto, Vegan, Vegetarian.

Japanese Blistered Shishito Peppers with Miso Aioli Dip, all ready for your next appetizer party, game-day snack, or happy hour. Here's a finger food that has taken over menus all across the continent this year. And understandably!

The first time Denis and I had these roasted shishito peppers was in a beach bar in Spain on the Mediterranean Coast. The menu was completely in Spanish. While we could figure out what most items on the menu were, it seemed they would all have gluten. When we asked the server about the last item on the list, he thought for a minute, searching for an English translation, but all he could come up with was "vegetables."

We ordered the "vegetables," looked at each other when this plate of wrinkly chili peppers arrived, thinking that our mouths were soon to be on fire.

But no. We LOVED them! We've since discovered that they're easy to make at home.

Shishito peppers are easy to make. All you need is a skillet and a little olive oil.

How do you pronounce shishito?

What are shishito peppers?

They're small green peppers, a little longer than a jalapeño, but wrinkly.  You'll find them called Japanese Shishito Peppers or Padron Peppers on some menus. Even though they're a chili pepper, they're mild-tasting, much milder than a jalapeño. However, a label on the bag warns that 1 in 10 can be extra spicy, so beware! Take your chances!

It makes eating these little peppers exciting--who will get the hot one? 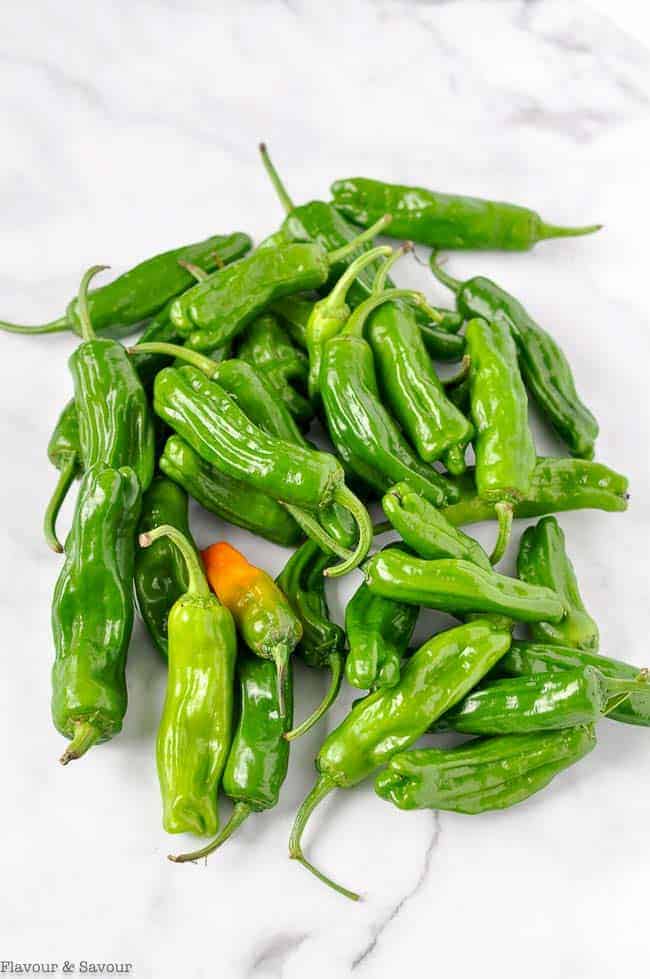 Where can I buy shishitos?

I sometimes have a hard time finding them in local grocery stores, as they get snapped up quickly, but Costco carries them when in season. You'll also find them at Whole Foods.
They're available year-round in some areas, but in North America they are usually harvested in late summer or early fall.
Padron peppers from Spain are very similar, and the two are interchangeable in this recipe.  You may find, however, that more than 1 in 10 will be hot ones. Even more exciting 🙂

What should I look for when choosing shishito peppers?

Look for peppers that are bright green, about 2 - 5 inches long, unblemished and firm. They will keep well for a few days in the fridge.

How do I eat shishito peppers?

Pick them up by the stem, and pop them in your mouth (except the stem.) Or dunk them first in a sauce for shishitos or Miso Aioli Dip, then devour.

Now that we've covered all the basics, I hope I've convinced you to try them!

Ready to get started? Here's all you'll need.

shishito peppers:  allow 6 to 8 peppers per person at a minimum. You'll find it's hard to stop eating them, and at only a few calories each, there's no worries about overeating!

olive oil: to toss the peppers in before cooking

Shishito peppers can be grilled, roasted in the oven or skillet roasted. I like to roast them in a cast-iron skillet on the stovetop, so I can keep an eye on them, turning when needed to get the perfect blistering.

🍽 What to serve with Shishito peppers

Are they Japanese or Spanish? As I mentioned above, Padron peppers from Spain are very similar to Japanese Shishitos, so feel free to mix cultures and enjoy them as a Japanese appetizer or as Spanish tapas!

These charred shishito peppers make a great game-day or happy hour snack. You can serve them on their own, or alongside a variety of other small bites or finger foods appetizers. Try them with these traditional Spanish tapas:

We also love them served as a side dish with these Easy Japanese Chicken Yakitori Skewers.

This recipe was originally posted in 2020. It has been updated with extra information to make it more helpful. The recipe remains the same.

If you liked this recipe, please leave a comment and a rating below. I'd love to hear how it turned out for you! Pin it and follow me on Pinterest for more tasty ideas. Subscribe to my weekly newsletter and never miss a recipe! 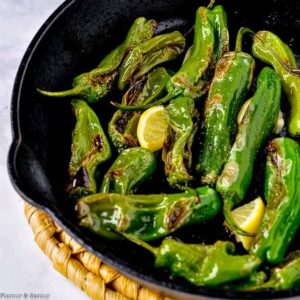 Nutrition calculations include all the dip. You may not need all of it.