I'm sharing my favourite Smoked Salmon Spinach Frittata today.  It's creamy, custardy, and it's filled with smoked salmon, potatoes and spinach and dotted with goat cheese! Here's a frittata recipe that works equally well for breakfast, lunch or dinner.

I sometimes like to cook a healthy egg recipe for dinner. If you love having breakfast for dinner (or brinner) occasionally too, this smoked salmon frittata is for you!

This recipe uses the stovetop-to-oven skillet method which is much easier than the traditional "fold and flip" stovetop method. You'll start the frittata in an oven-proof skillet on the stovetop, then transfer it to the oven to finish cooking. It's almost foolproof! Honestly, this frittata has never failed me. I use the same method to make this Double Cheese Asparagus Leek Frittata.

Another bonus? A frittata tastes just as good hot or cold! It makes great leftovers for lunch and can be reheated for a quick meal.

Frittata means "fried" in Italian. While this is an Italian-inspired egg dish, adding potatoes gives it a delicious Spanish flair, as it's similar to Tortilla Espanola - a Traditional Spanish Tortilla.

Ready to make sure you have everything you need to make this smoked salmon frittata?

Here's an overview of what you'll do to make this flavourful smoked salmon frittata. Complete directions are in the recipe card below.

How will I know when the frittata is done?

A frittata will be done when it is light golden in colour and puffed up. When you give the pan a gentle shake, the center will be a little jiggly. Take it out of the oven at this point and let it cool for five minutes on the counter. It will continue to cook and firm up a little.

What's the difference between a frittata and an omelet?

An omelet is of French origin. It is made with beaten eggs that are quickly fried and folded around fillings such as cheese, mushrooms, spinach, ham, bacon or other chopped veggies.

A frittata is like an open-faced omelet with the additions cooked inside. It's usually started on the stovetop and finished in the oven. It's similar to a quiche in that it has a custard-like filling, but it is not baked in a crust, making it ideal for gluten-free diets.

Make this frittata even more appetizing with garnishes!

While a puffy golden frittata looks enticing when you first remove it from the oven, it will deflate somewhat and won't be as appetizing. Here's where garnishes come to the rescue!  Add any of the following to dress it up:

Leave out the spinach, or use greens of your choice. For example, try finely chopped kale, bell peppers or even leftover veggies.

How to Store a Frittata

This smoked salmon frittata will stay fresh for a few days in the refrigerator. Serve it cold, at room temperature, or reheat it gently in the microwave.

Frittatas don't freeze well. They become watery once thawed, so enjoy this brunch or brinner egg dish fresh from the oven! 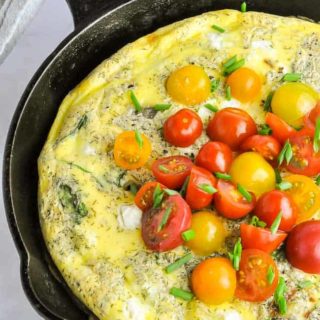