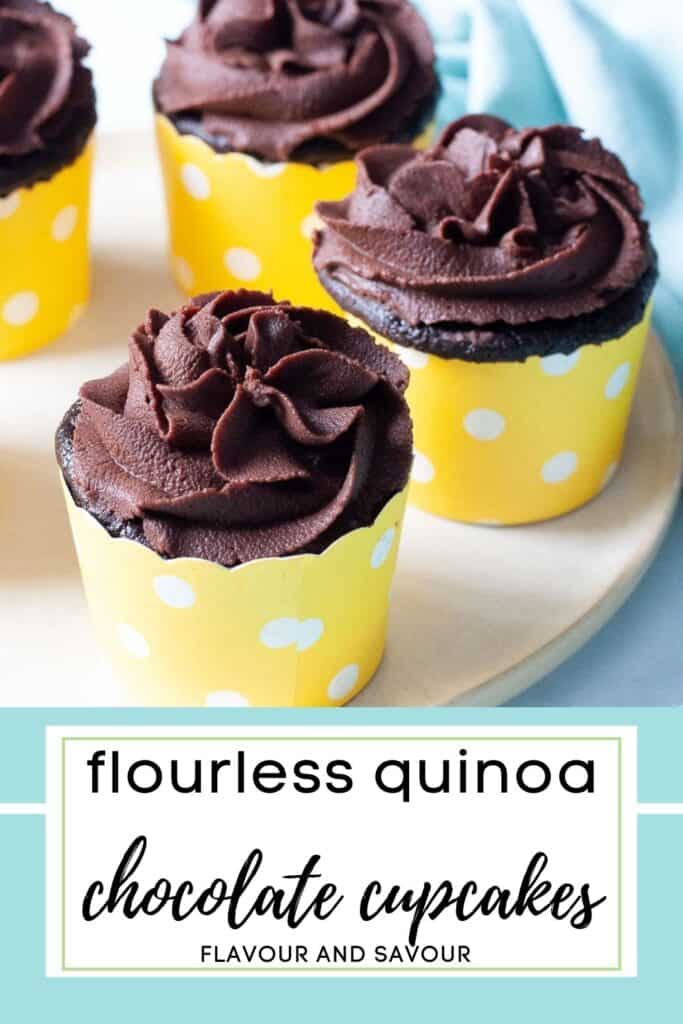 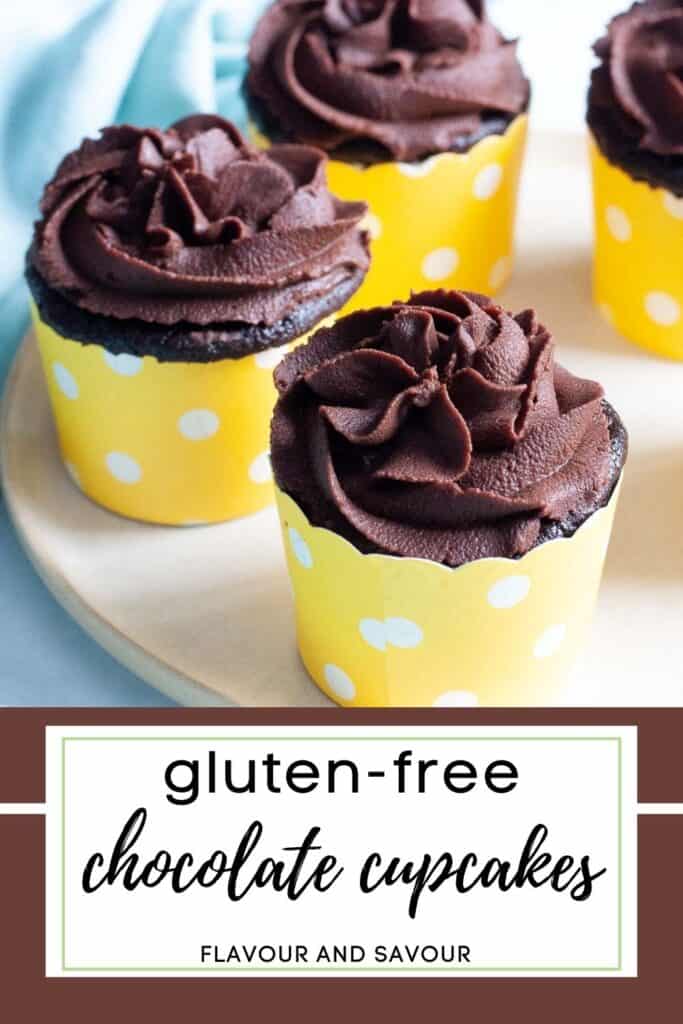 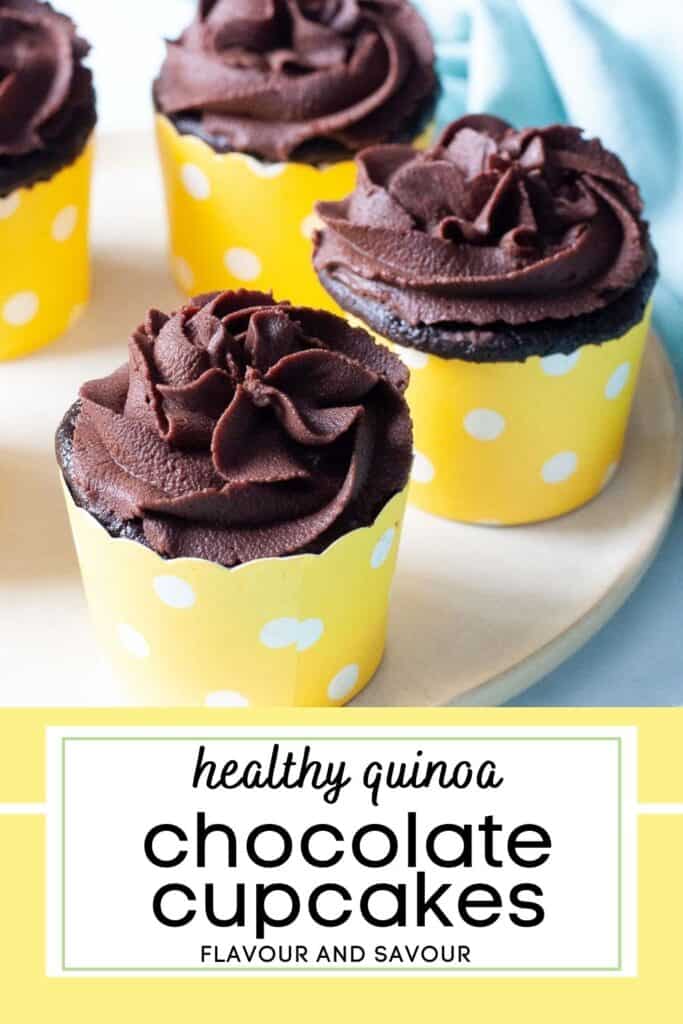 These Gluten-free Quinoa Chocolate Cupcakes are deliciously moist with a rich dark chocolate flavour. They can be made without refined sugar! These flourless cupcakes are perfect for a birthday or special dessert when topped with whipped chocolate coconut milk frosting.

Chocolate Quinoa Cupcakes:  let's bring back an old favourite! Do you remember when Chocolate Quinoa Cake first appeared on the scene a few years ago? We all felt like we were making a healthier choice by adding quinoa to our cake batter. And now this recipe for even healthier chocolate quinoa cupcakes satisfies all my criteria for a cupcake!

You'll find a complete list of ingredients with amounts in the recipe card below. But before we get to the full recipe, here are a few notes about some of the key ingredients.

Here's an overview of what you'll do to make this recipe perfectly. You'll find complete instructions in the recipe card at the end of this post.

You'll start by cooking the quinoa and letting it cool while you prepare the rest of the recipe.

Next, you'll prepare your baking pans. This recipe will make 18 muffins or 12 regular muffins and 18 mini muffins. Alternatively, it will make two 8-inch round cakes or one 9 x 13-inch cake.

After combining the milk, eggs and vanilla in a blender, you'll add the cooled quinoa, melted butter and coconut oil to the blender. Sift the sugar, cocoa, baking powder and baking soda, then add the blended ingredients to the dry ingredients.

Fill the muffin tins and bake!

Once they're completely cool, frost them with chocolate coconut milk frosting.

Tip: If you make sure to wait until it is completely chilled and beginning to harden before you whip it, you'll be happy with the results. It holds its shape and makes decorating with a piping bag a breeze. Some brands of coconut milk will become firm faster than others.

If you find it has hardened too much to whip, let it sit at room temperature for a few minutes until slightly softened.

I've made this recipe many times, as cake, as muffins, and as cupcakes and it's always popular. I also like to make these as mini cupcakes for those who want a tiny taste!

I adapted the original recipe that appeared in Quinoa 365. I replaced the milk with a plant-based alternative and reduced the amount of granulated sugar and replaced it with coconut sugar. Best of all, I added a fabulous whipped chocolate frosting made with coconut milk.

Make sure you have a can of full-fat coconut milk chilling in the refrigerator for 24 hours.

Cook and cool the quinoa. Please note that the recipe requires 2 cups of COOKED quinoa, not dry. Cook ⅔ cup of dry quinoa in 1 ⅓cups of water to yield 2 cups of cooked quinoa. Measure the cooked quinoa before adding it as sometimes it yields a little more than 2 cups.

Both types of sugar make a delicious chocolate cupcake!

If you have a high-speed blender like a Vitamix or a Blendtec, definitely use it for this recipe! It breaks down the quinoa very quickly, so there are no little lumpy seeds in the finished product. I would imagine a regular blender or food processor could do the same with just a little more processing time.

This recipe does not produce cupcakes with a high rounded dome. They do rise and they have a light texture, but they often sink a little after baking. You can make that rounded dome look with frosting if you'd like.

Is quinoa just a trendy food?

With the publication of the popular cookbook Quinoa 365 way back in 2010, quinoa became a trendy food.

Advertised as gluten-free, wheat-free and nutrient-packed, we were adding it to everything: stir-fries, salads, burrito bowls, muffins, and yes, even chocolate cake. Later, it played second fiddle to chia seeds and goji berries as they rose in the food trend charts and we experimented with these superfoods.

But quinoa's popularity has resurged once again, and it is now higher than ever. It's an ancient crop, grown in the Andes. While it is a grain crop, it is grown for its seeds, the part that we eat. Quinoa is a good source of protein, it's gluten-free, and it is easy to digest.

To store: Frosted cupcakes need to be refrigerated. It's best to store them in an airtight container.

To freeze: These quinoa cupcakes freeze beautifully. Freeze in an airtight container for up to 3 months.

Serve these flourless chocolate cupcakes and wait for chocolatey smiles all around!

When you make these gluten-free quinoa chocolate cupcakes, please leave a comment and a star rating below. Thanks in advance! Subscribe to my newsletter and receive new recipes delivered straight to your inbox once a week.

This recipe was originally published in 2016. It has been updated with extra information and new photos. 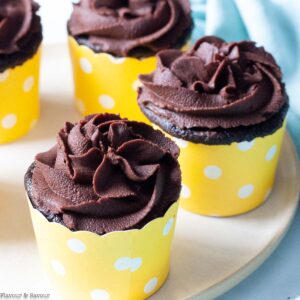