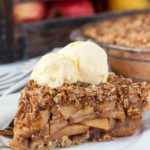 Look like a pro when you bake this homemade Gluten-Free Dutch Apple Pie. Apple pie with almond flour crust and a crumble topping is a perfect dessert for any time of the year. 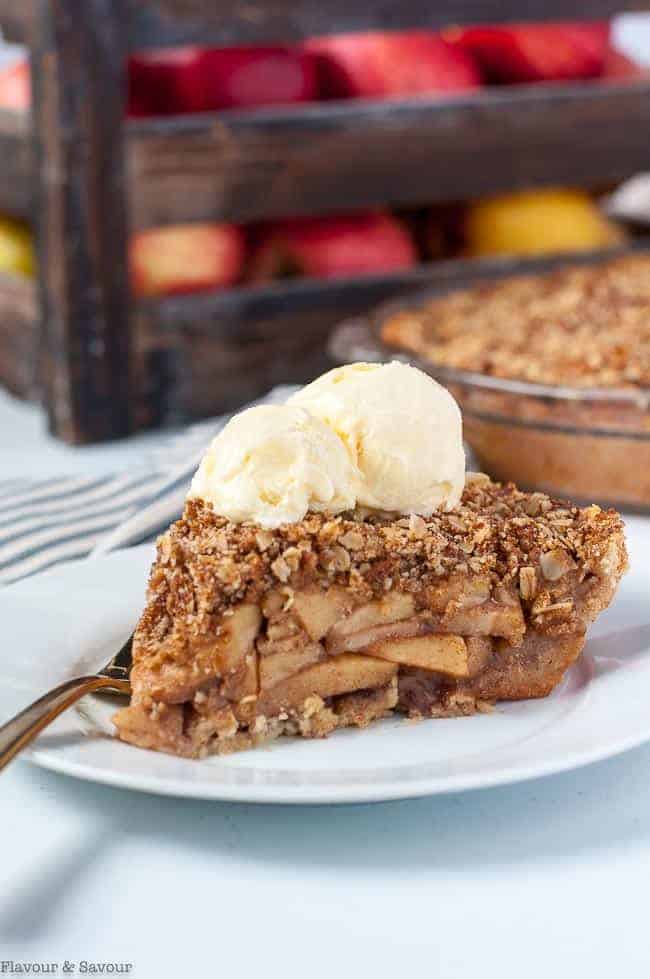 When the local apples begin to ripen on the trees, my thoughts always turn to apple desserts, and especially Dutch Apple Pie. And just because you're following a gluten-free diet doesn't mean you have to deny yourself the sheer pleasure of a warm slice of apple pie!

Dutch Apple Pie with almond flour crust is the answer!

Apple pie was one of the first desserts I learned to make when I was first married. Before I found a Never-Fail Pastry recipe, I struggled with making tender pie crusts. Topping my apple pies with a crumble crust meant I could avoid ending up with a patched-up top pastry crust!

Dutch Apple Pie soon became our family's favourite, but when I eliminated gluten from my diet, I had to find a way to make a really great pie that would be a good substitute.

I've experimented with pie crusts made with gluten-free flour blends from time to time, but they can be tricky to handle.  This apple pie with almond flour crust works well for me! 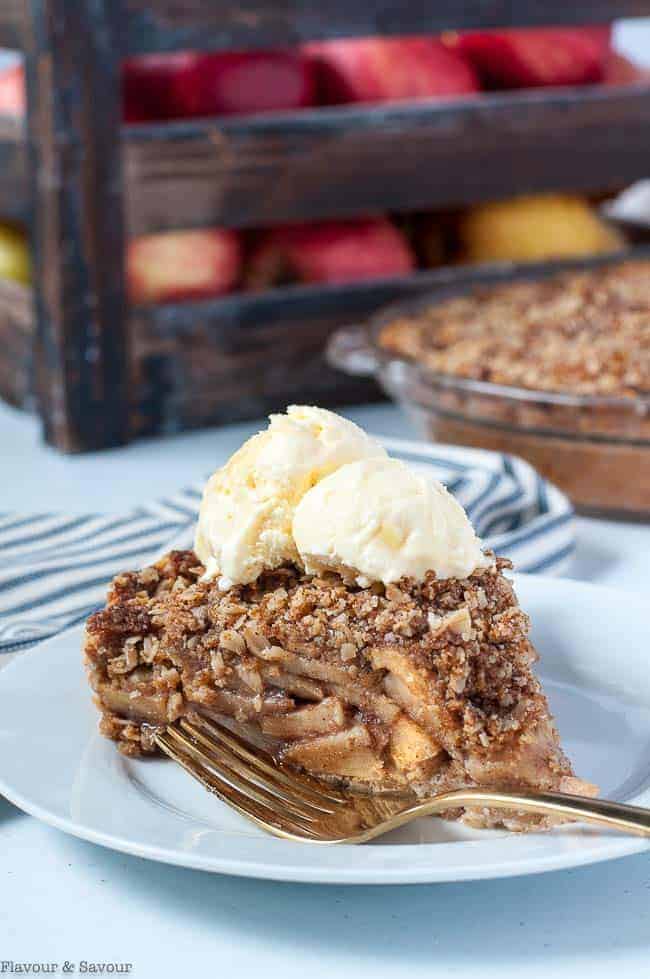 My favourite gluten-free pie crust is this one made with almond flour. It's sturdy enough to hold all that delicious filling, but it's still tender.

Leftover pie (is there such a thing?) is best stored in the refrigerator as it keeps the crust firm. Bring to room temperature before serving this gluten-free apple pie. It's great with a scoop of ice cream!

I'm sure there is a technical difference, but the two terms seem to be used interchangeably in many recipes. A Dutch Apple Pie has a streusel-like topping instead of a pastry or lattice top crust. In my opinion, it's far more interesting! I like to make mine with wholesome oats and almond flour.  Sometimes I also add a handful of finely chopped pecans for extra crunch.

What are the best apples for apple pie?

I like to use a mixture of different kinds. I usually choose some crisp apples (like Honeycrisp, Gala, Jonathan, or Braeburn), some softer apples (like MacIntosh or Spartan) and a tart Granny Smith apple, for some contrast.

What kind of sweetener is best for Gluten-Free Dutch Apple Pie?

The granulated texture helps to provide structure. In the filling, you could use a small amount of honey or maple syrup in place of the granulated sweetener if you like.

Pulse the almond flour, tapioca flour, sugar, salt and chilled in a food processor until it resembles coarse meal. 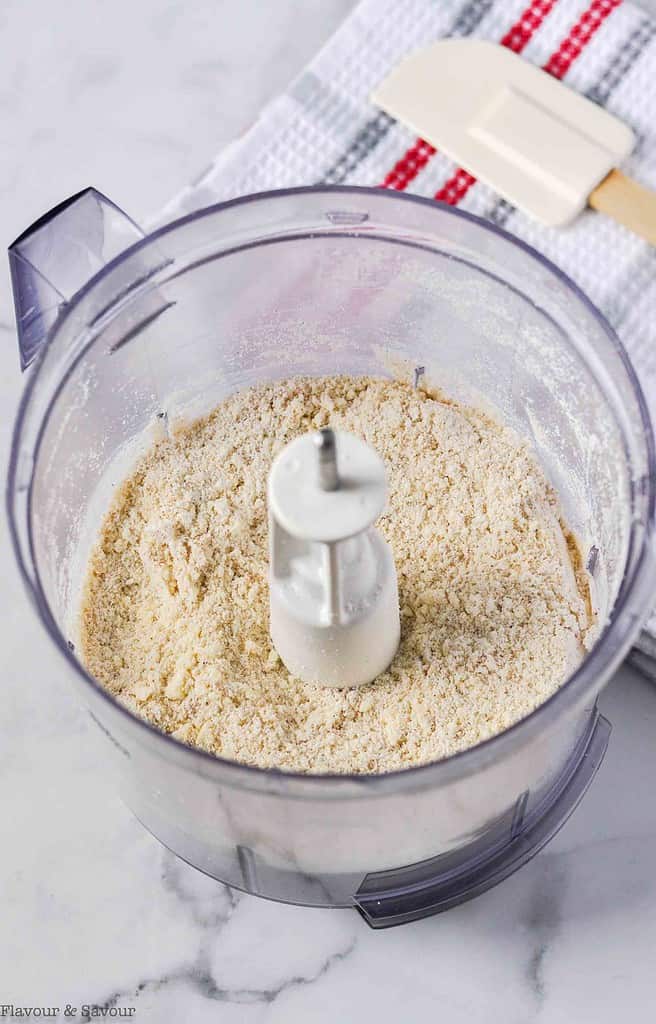 Beat an egg in a small bowl, add half of it to the dough, pulsing until it comes together and forms a ball. You may need to add a teaspoon or two more of the beaten egg.

Alternatively, combine the almond flour, tapioca flour, salt and sugar in a medium bowl and cut in the butter with a pastry blender until it resembles coarse meal. Beat the egg in a small bowl, and add half of it to the dough, mixing until it forms a ball.

Lay the dough on parchment paper or plastic film, cover with another layer of the same and press into a disc shape. Refrigerate the dough for at least an hour or overnight. 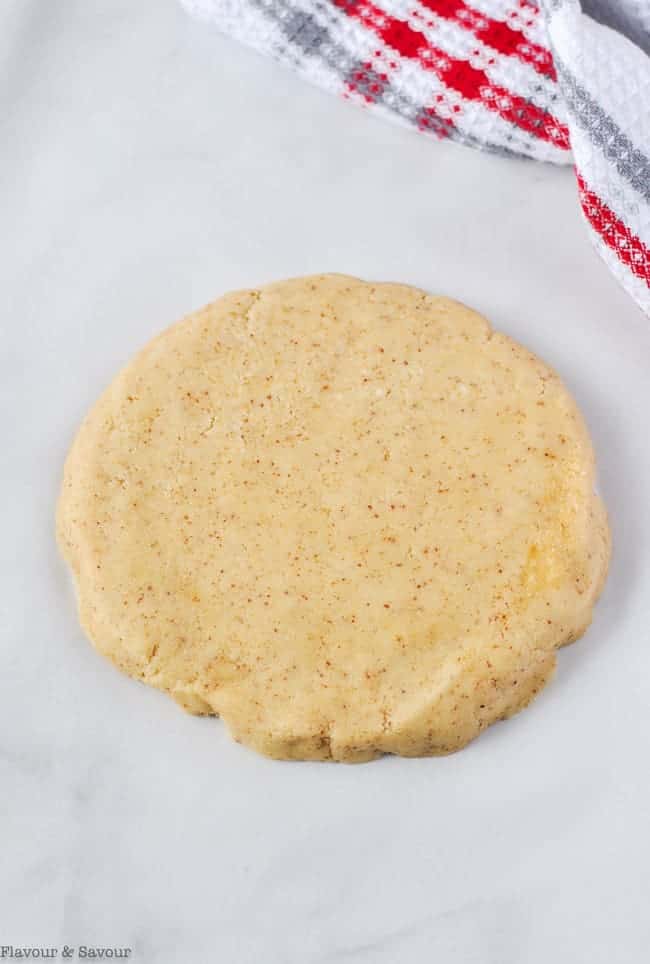 Carefully invert into a 9-inch round glass pie plate. It will probably break, but you can easily press it back into shape. Use your fingertips to crimp the edges.

Return the pie crust to the fridge or freezer to chill while you prepare the filling and topping. 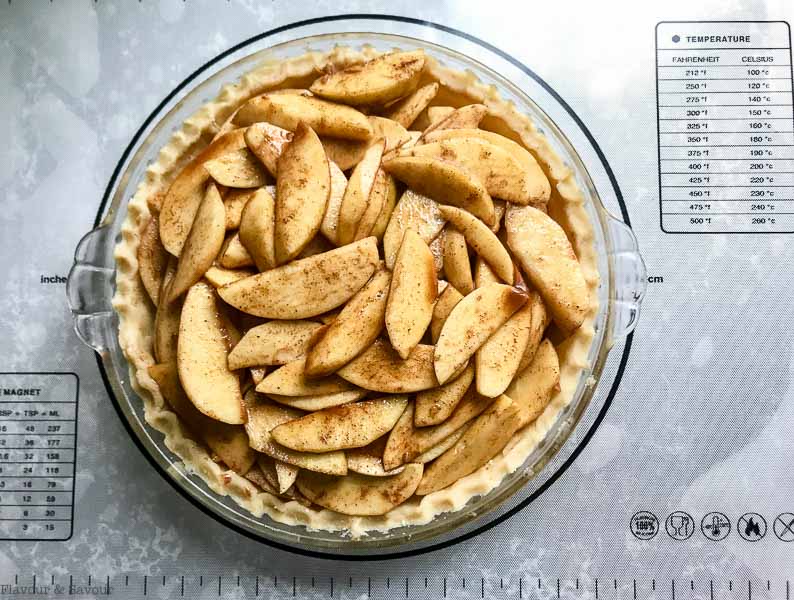 I hope you'll try this Gluten-Free Dutch Apple Pie with almond flour crust. It's rich with warm fall spices and it has all the flavour of a classic Dutch apple pie without the bothersome gluten! 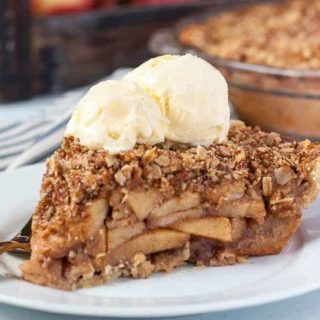 This post contains affiliate links. If you click on any of the affiliate links and make a purchase within a certain time frame, I’ll receive a small commission. The commission is paid by the third party, not by you. I am a participant in the Amazon Services LLC Associates Program, an affiliate advertising program designed to provide a means for me to earn fees by linking to Amazon.com and affiliated sites.

SAVE THIS TO ONE OF YOUR PINTEREST BOARDS and connect with me on Pinterest! I’m always finding new tasty recipes to pin. Subscribe to my weekly newsletter and never miss a recipe!

Welcome! I'm Elaine. I use fresh ingredients to create quick and easy, healthy gluten-free recipes that are always delicious! I love spending time with family and friends around our table, sharing good food. About me!