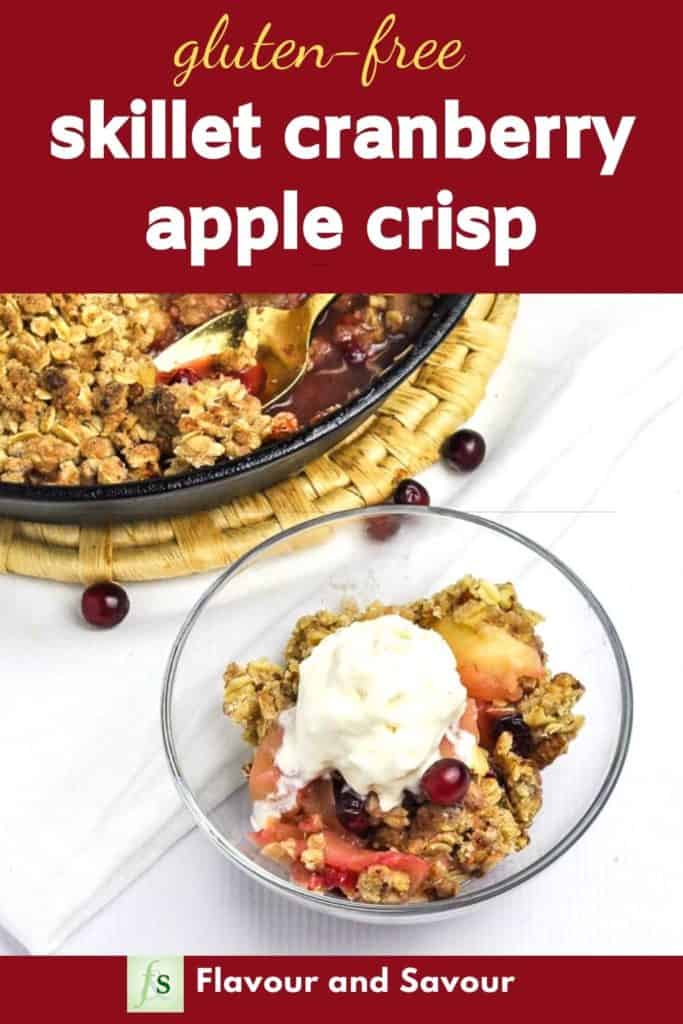 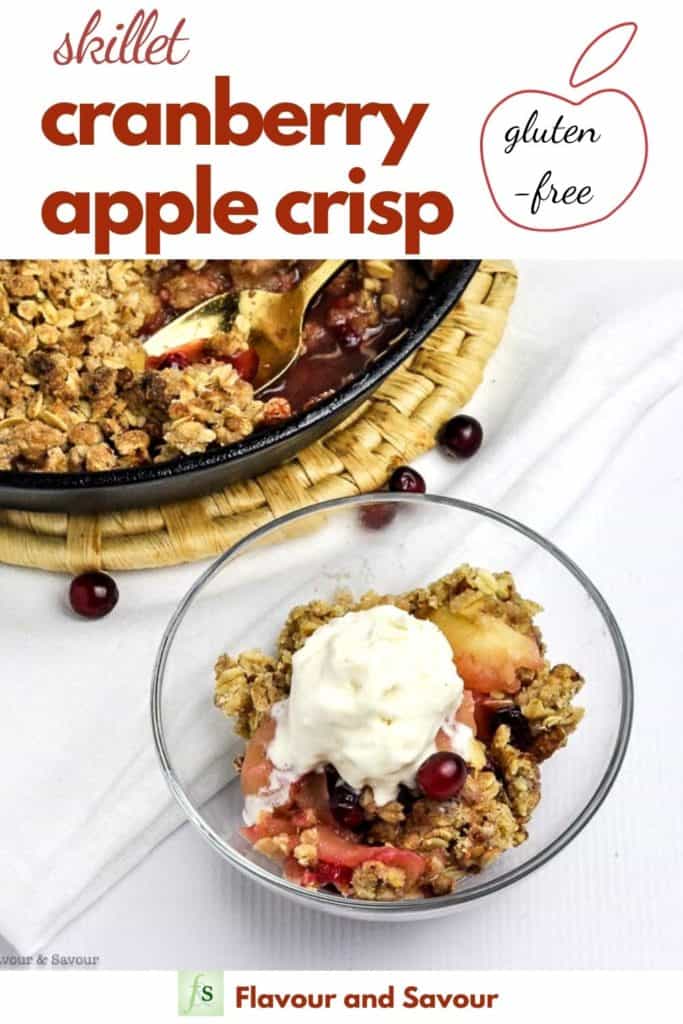 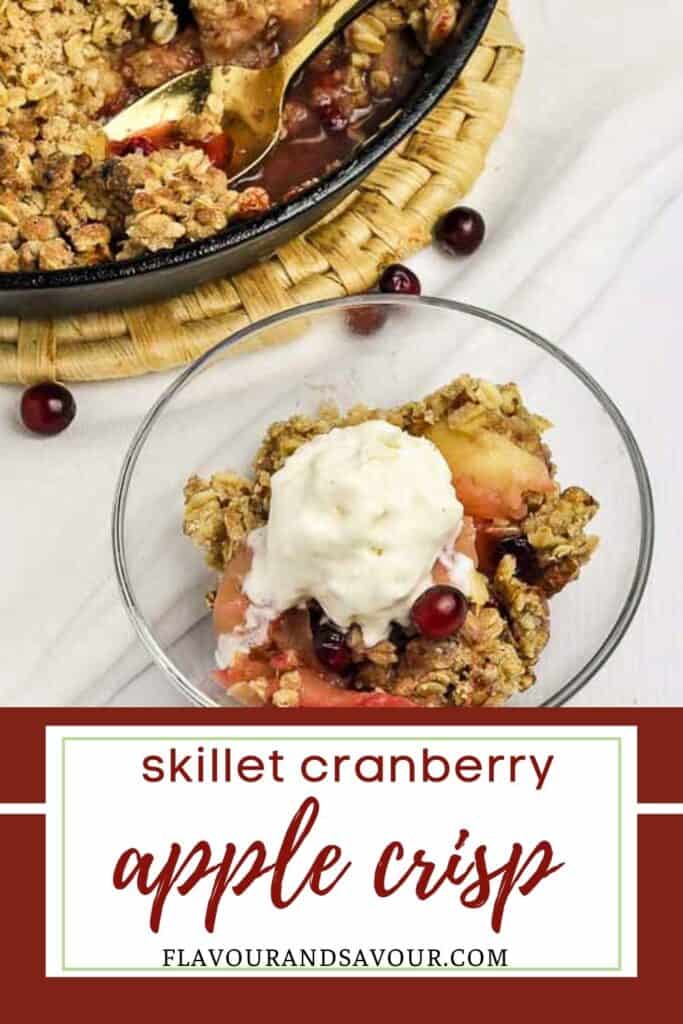 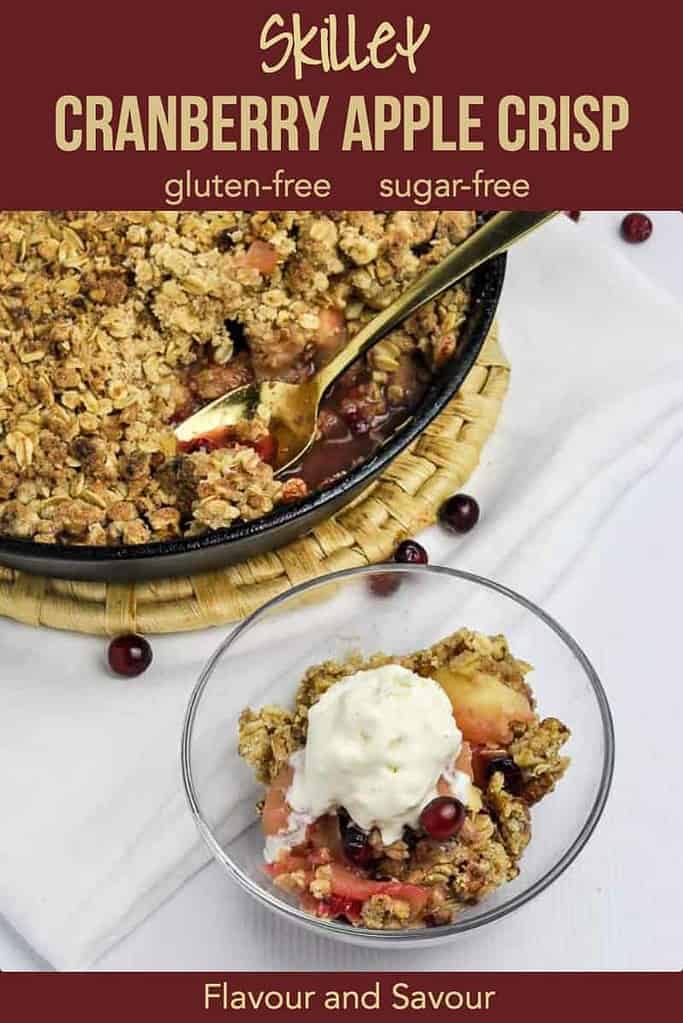 It's sweet (but not too sweet) with tender apples and a crispy, crunchy topping made with wholesome rolled oats and pecans. Best of all, it's gluten-free and you can make it sugar-free, too.

I reduced the amount of sugar, added cranberries, substituted a gluten-free flour blend for wheat flour, and have given you the option to use a 0-calorie sweetener. The result? A healthy family-style cranberry apple dessert that's special enough for a dinner party, too.

Why make apple crisp in a skillet?

One of the problems with making apple crisp using the traditional oven baking method is the fruit cooks unevenly. Softening the apples in a skillet on the stovetop first prevents this problem. You'll have apples that are slightly browned and caramelized, heightening their flavour.

Double the recipe for the Pecan Oat Crisp Topping and store half in a zipper-lock bag in the freezer to make another crisp on a busy day.

To calculate the ingredient amounts, click on the number of servings in the recipe card below. A little slider will appear. Move it to 16 to double the recipe. Next time you want a quick dessert, you'll be ahead of the game!

Is it a crisp or a crumble? What's the difference?


Crisps and crumbles are part of the same family of cooked fruit desserts that include cobblers, brown betties, grunts, pandowdies, and slumps. All involve cooking fruit with some type of crust (on top, on the bottom or both) or dumpling.
They're popular desserts because they are simple to make, quicker to prepare than pie, but equally as delicious. Crisps and crumbles are unpretentious desserts that showcase fresh seasonal fruit like apples, berries, peaches and more.
While the two terms are often used interchangeably, some people do make a distinction between the two. A crisp, like this Skillet Cranberry Apple Crisp, includes a crunchy topping made with butter, flour, sugar, oats and sometimes nuts and spices.
A crumble, on the other hand, is generally made with a streusel-like topping that rarely includes nuts or oats. However, often the two terms are used to refer to the same thing:  a wholesome, delicious dessert!

What kind of apples are best to use in cranberry apple crisp?

I used Honeycrisp apples in this recipe, but any sweet, crisp apple variety like Braeburn, Gala, or Fuji can be substituted. Stay away from Granny Smith apples this time; they're too tart when combined with fresh cranberries.

Do I have to use a cast iron pan?

No, any 12-inch ovenproof skillet will work. If your skillet is not oven-safe, prepare the recipe through step 4 (below), then transfer the apples to a 13 by 9-inch baking dish.

Store leftover crisp covered in the refrigerator. It will last for up to 3 days.

You can freeze this crisp unbaked if you'd like. I suggest preparing it in a baking dish instead of a skillet. Thaw overnight in the fridge, then follow the baking instructions.

I've made more fruit crisps in my life than I could ever begin to count. You'll find several fruit crisp recipes here on Flavour and Savour.

I usually make a crisp topping, flavour the filling with spices or liqueurs, and add a thickener like cornstarch to thicken the filling. I bake it in the oven for 45 minutes or longer.

While I love these fruit crisp recipes and make them often, this gluten-free Cranberry Apple Crisp is definitely my new favourite!

When you make this recipe, please leave a comment and a rating below! 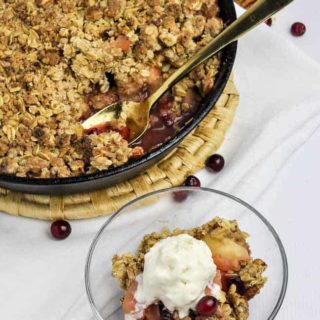