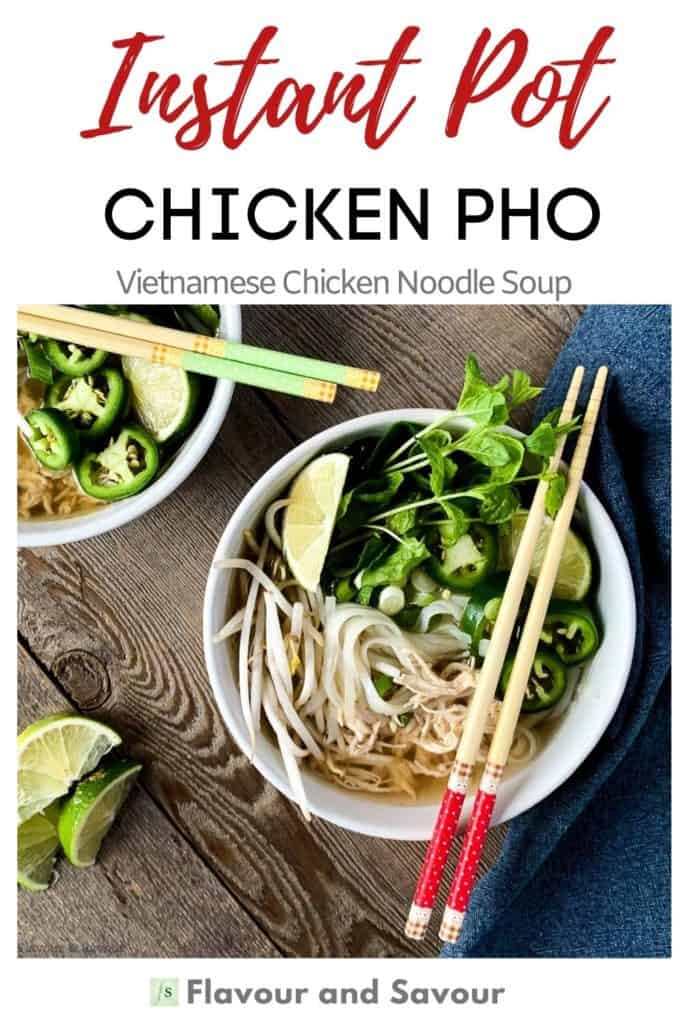 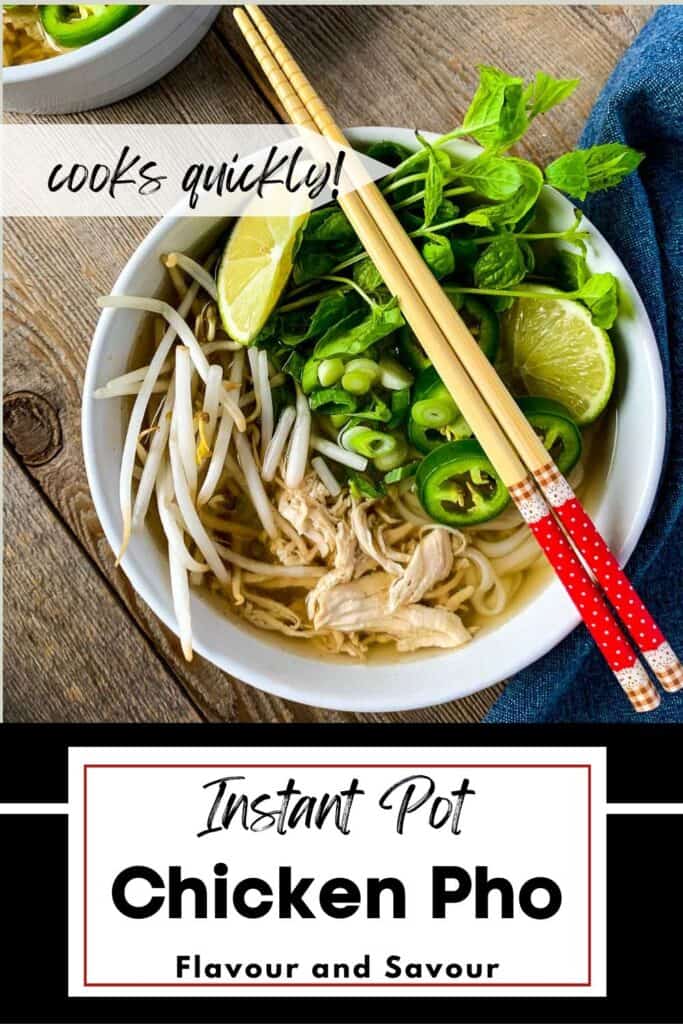 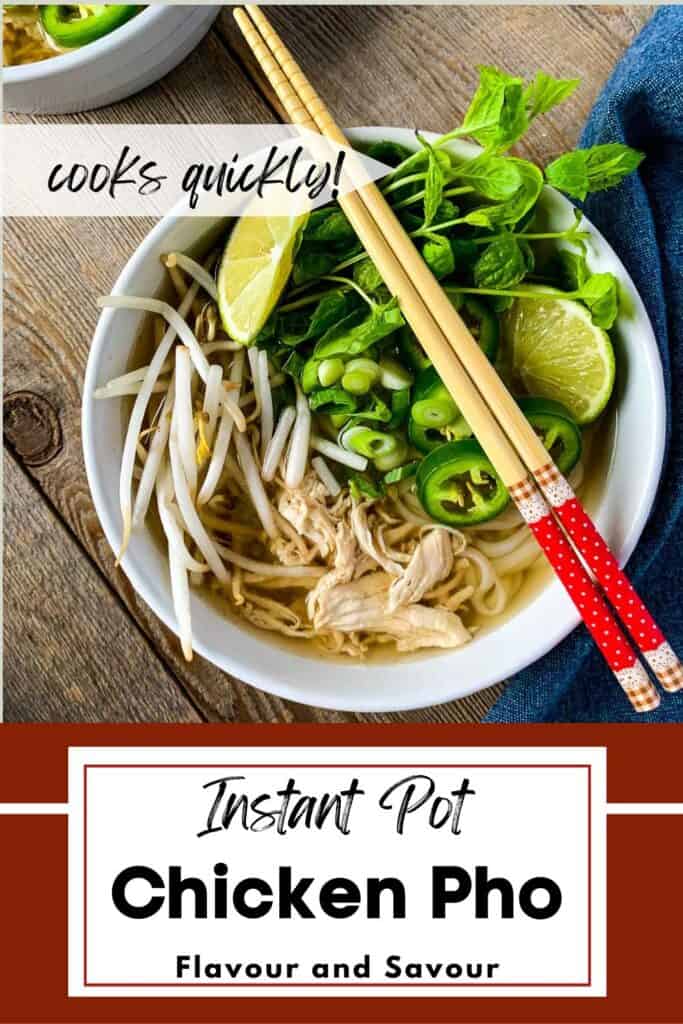 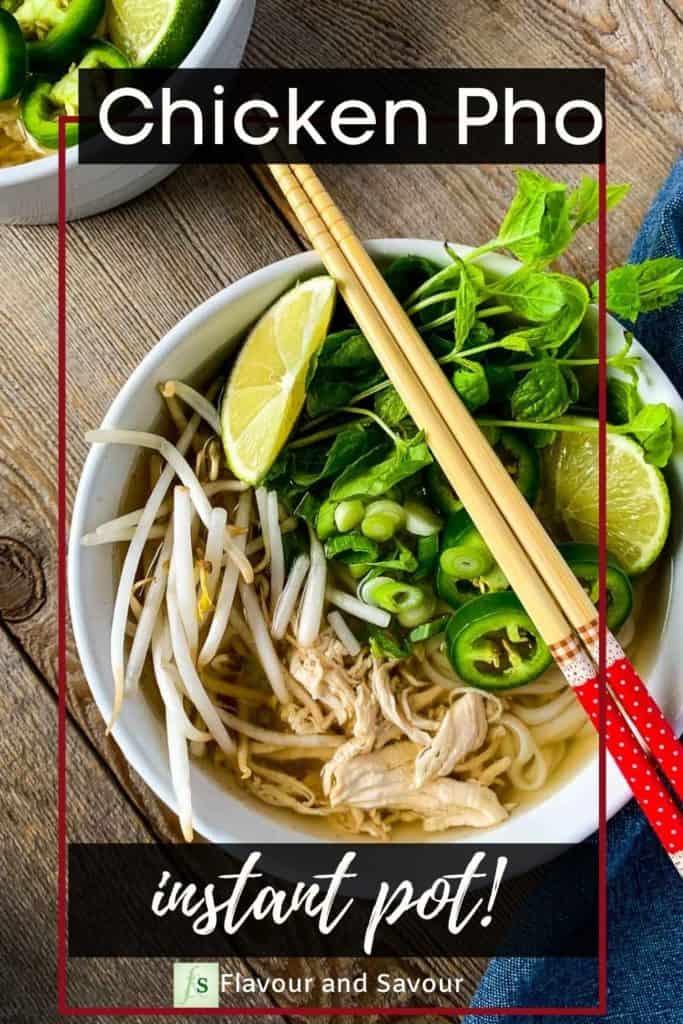 This Instant Pot Chicken Pho has a richly flavoured broth, tender chicken, and silky noodles ready for slurping! Cooked quickly in an Instant Pot, this Vietnamese Chicken Noodle Soup has all the flavour of long-simmering chicken pho.

It doesn't matter to which culture you belong: we all know the healing power of chicken soup! This Vietnamese Chicken Pho is Viet Nam's version of good old chicken soup! However, we love its deep, richly flavoured broth, light rice noodles, shredded chicken and fresh greens that top our bowls.

Traditional Vietnamese Pho is made with beef. Historically, beef pho was simply a bowl of noodles, broth and boiled beef.

When refugees were fleeing Viet Nam in the mid 1970's, they brought with them their culture and cuisine, which quickly became popular all over North America. We've benefited ever since!

There are lots of recipes for Pho, but this Instant Pot Pho is the one I like best. It has a broth with flavours so deep you'd think it had been simmering for hours and yet, it's all made in just a few minutes in an Instant Pot or electric pressure cooker!

Quick and easy with lots of flavour and it cooks in a fraction of the time of a traditional Vietnamese Pho recipe. That's my kind of recipe!

The first time I made this Vietnamese Chicken Noodle Soup, I loaded up my bowl with sliced jalapeños and could hardly eat the broth!

Jalapeño slices look attractive, but they do add a lot of heat when you pour hot broth directly over them. You've been warned.😊

Try this recipe with cooked shrimp instead of chicken. Add the cooked shrimp to the bowls when you add the noodles and garnishes.

Vary the toppings according to what you like! I like the crunchy contrast of bean sprouts with rice noodles. A squeeze or two of lime adds interest; green onions have a gentle, mellow flavour.

Fresh herbs, like mint, basil or cilantro add lots of flavour and colour, too.

Store leftover broth separately in a glass jar or container, then reheat on the stovetop or in the microwave and pour over shredded chicken and freshly cooked noodles.

The broth for this pho ga freezes beautifully. To use, thaw in the refrigerator overnight, then heat on the stovetop or in the microwave.

Add, or offer, toppings to add to your bowl. Try any or all of the following garnish options.

When you make this easy Chicken Pho, please leave a comment and a star rating below. I love hearing when you've made one of my recipes! Thanks in advance.

Subscribe to my weekly newsletter and have new recipes delivered straight to your inbox.

Jalapeño slices look attractive as a garnish, but they do add a lot of heat when you pour hot broth directly over them. You've been warned.😊