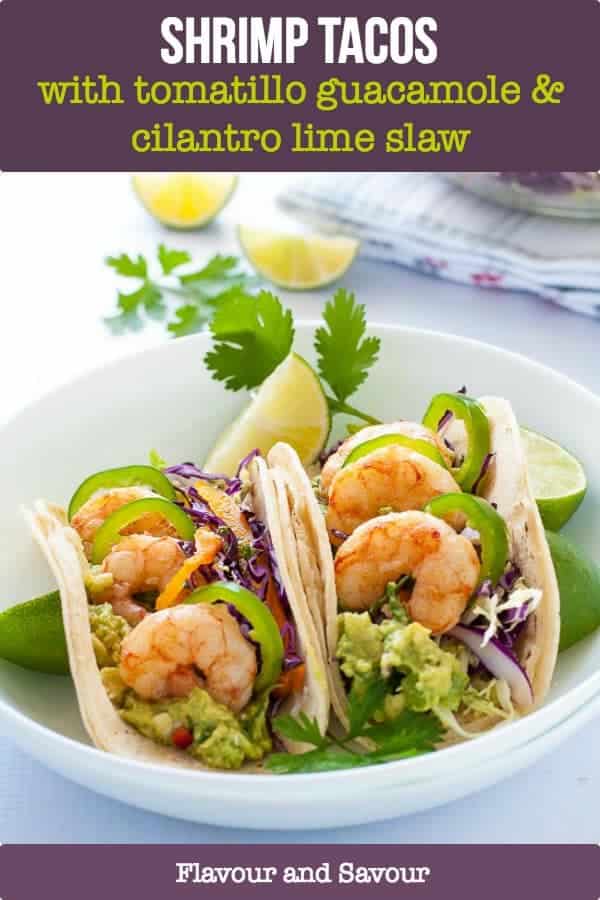 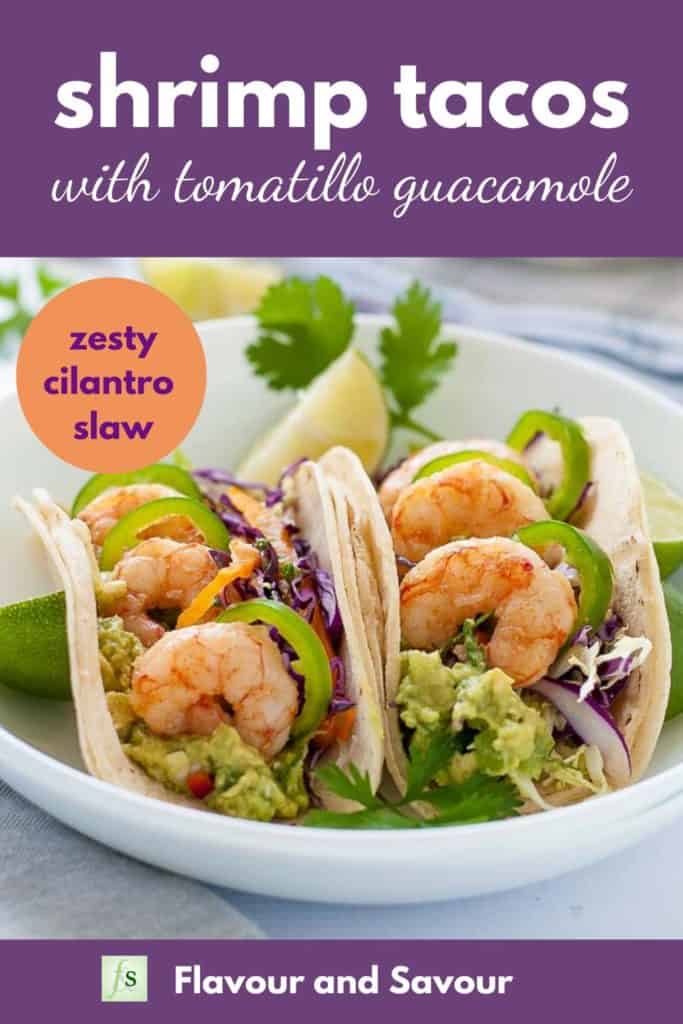 These grilled Shrimp Tacos are loaded with zesty Tomatillo Guacamole, Cilantro Lime Slaw and garlicky buttered shrimp. Top them off with fresh jalapeño slices and a squeeze of lime.

Say hello to my new favourite tacos! These grilled shrimp tacos have everything I look for in a taco: crisp, crunchy shredded vegetables, chunky guacamole and a zesty dressing.

While I often make tacos like these Grilled Fish Tacos with Pineapple Rhubarb Salsa, or Shredded Chicken Tacos, today I decided that shrimp was on the menu. I concocted this combination with garlicky buttered shrimp and a new favourite taco was born!

I used a mandolin to slice everything thinly, but a sharp knife will do the trick too. Or, use a box grater or the grating disc on a food processor to finely shred the veggies. Fresh!

Toss all these crunchy vegetables with a piquant cilantro lime dressing. You can add a little honey to the dressing to balance out the tartness of the lime juice. This cilantro lime slaw is slightly sweet and makes a great contrast to the garlic buttered shrimp. Just look at those colours!

Next, make a batch of tomatillo guacamole. Mash a couple of avocados with a fork, leaving them a little chunky and add garlic, lime, cilantro and a little salt. Then, finely chop a couple of tomatillos to add a pop of flavour and some crunch to the guacamole.

I usually add a few tomatoes to my tried-and-true Quick Chunky Guacamole recipe, but adding tomatillos instead is nothing short of brilliant, if I do say so myself!

How to choose a tomatillo

Tomatillos are usually sold with their papery outer husk intact.  Keep the husk on until you're ready to use them, then peel it off and wash the tomatillo as there may be some sticky residue left from the husk.

Choose tomatillos that have smooth, unblemished, bright green skin and are not much larger than a golf ball. Larger ones may have less flavour.

And now that you have both the slaw and the guacamole ready, it's time to grill the shrimp. The best way I've found to grill shrimp and avoid losing them between the grates is to skewer them first.

Brush with garlic butter and grill for a minute or two on each side until they develop a nice colour and become opaque. Don't overcook them. They'll become rubbery, and no one likes rubbery shrimp!

In a hurry? Sauté them in a skillet instead. 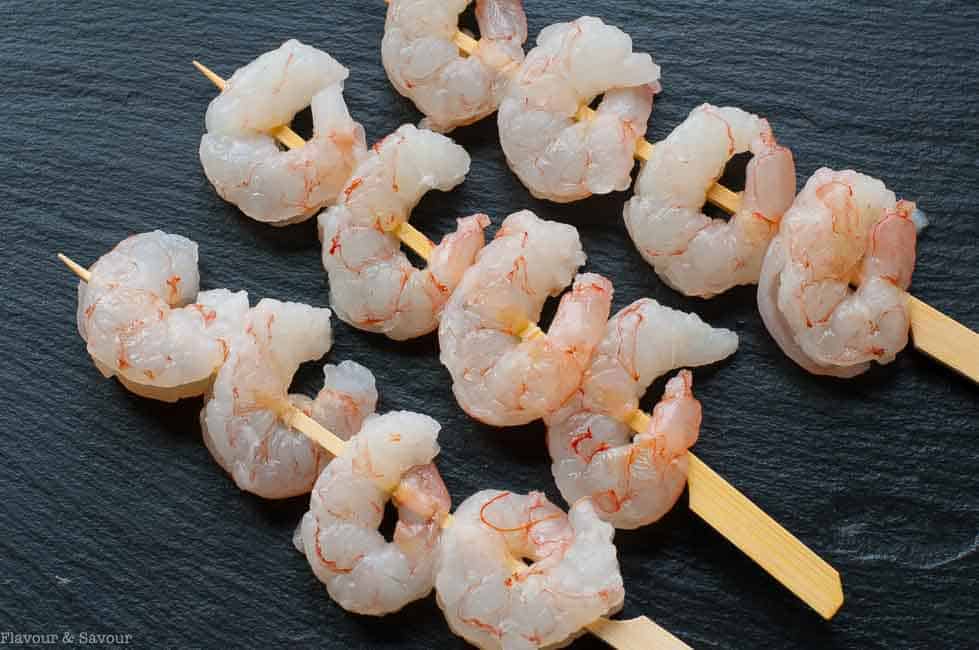 Begin by heating the tortillas. Layering two tortillas together makes them easier to handle and avoids leaks!  Heat them either in the oven wrapped in foil, in the microwave covered with a towel, or if you like them crispy, heat a few at a time on a grill.

You can also heat tortillas in a hot wok! Because of the increased surface area, a wok will heat 5 or 6 at a time, while a skillet will only heat 2 or 3. I used small, 5-inch white corn tortillas to keep this meal gluten-free.

Then add your taco fillings! Start with the cilantro-lime slaw, add the tomatillo guacamole, arrange the garlic buttered shrimp on top and add a few slices of jalapeño pepper.

Fold them up, pop them in a serving dish and add a few lime wedges for an extra squeeze of flavour.

Yum alert! These grilled shrimp tacos are bound to become your new favourite, too. And if you love zesty flavourful shrimp, you'll also like these 10 Minute Grilled Chimichurri Shrimp Skewers. 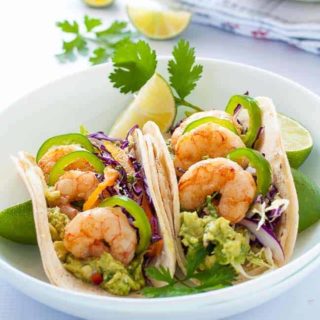 The ingredient amounts for the Cilantro Lime Slaw will make more than you need for the tacos. I like to serve extra on the side. This slaw is also great for lunch the following day.