Home » Entrées/Main Dishes » Hosting a Paella Party in Your Kitchen 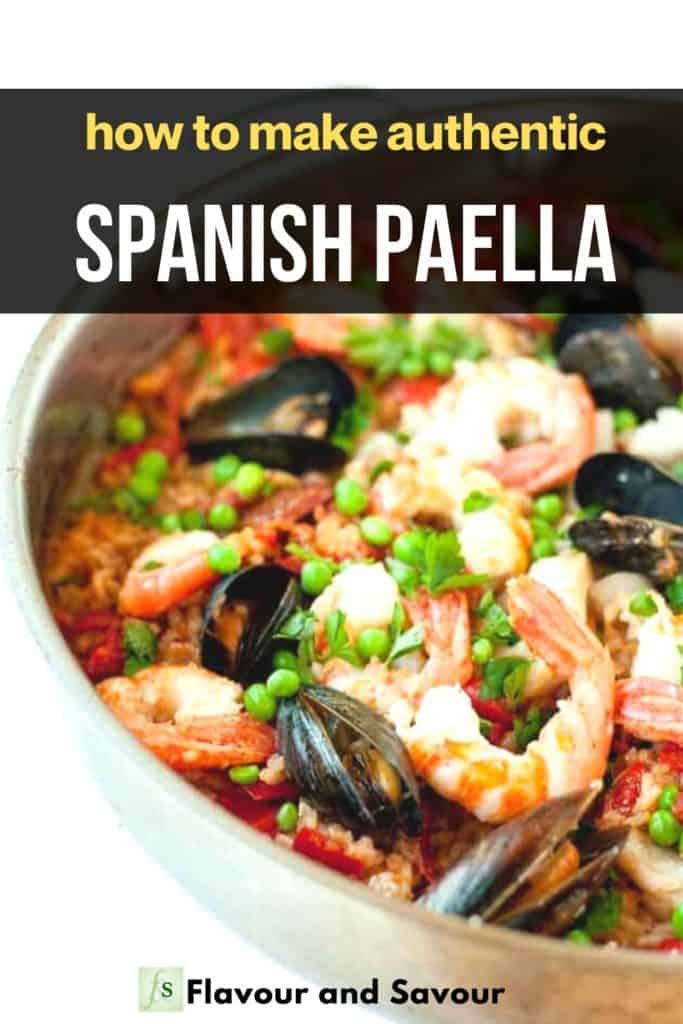 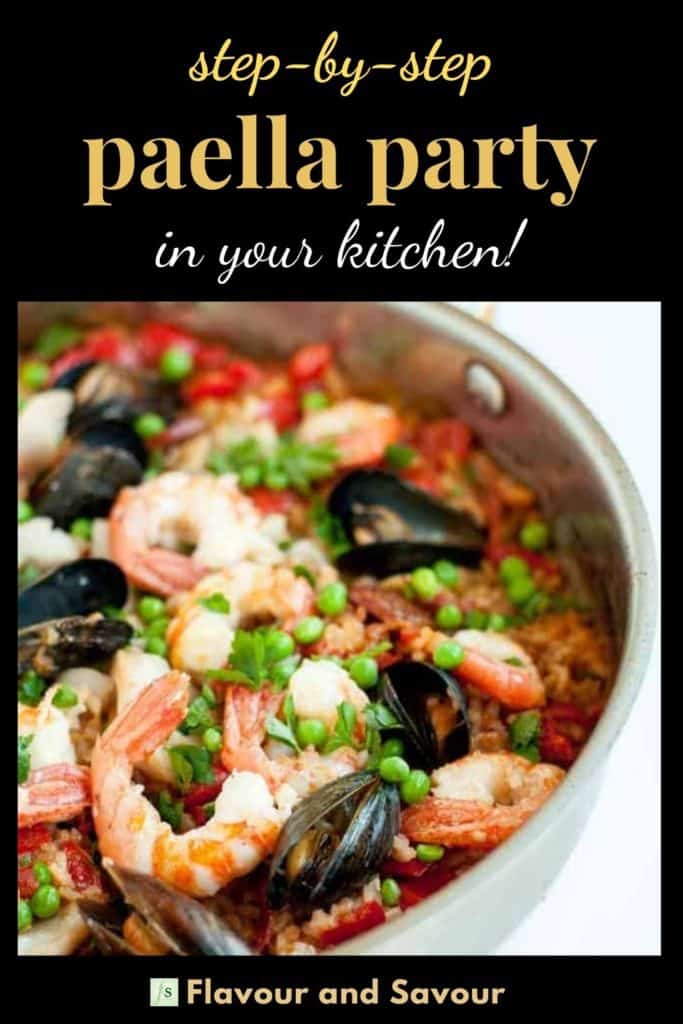 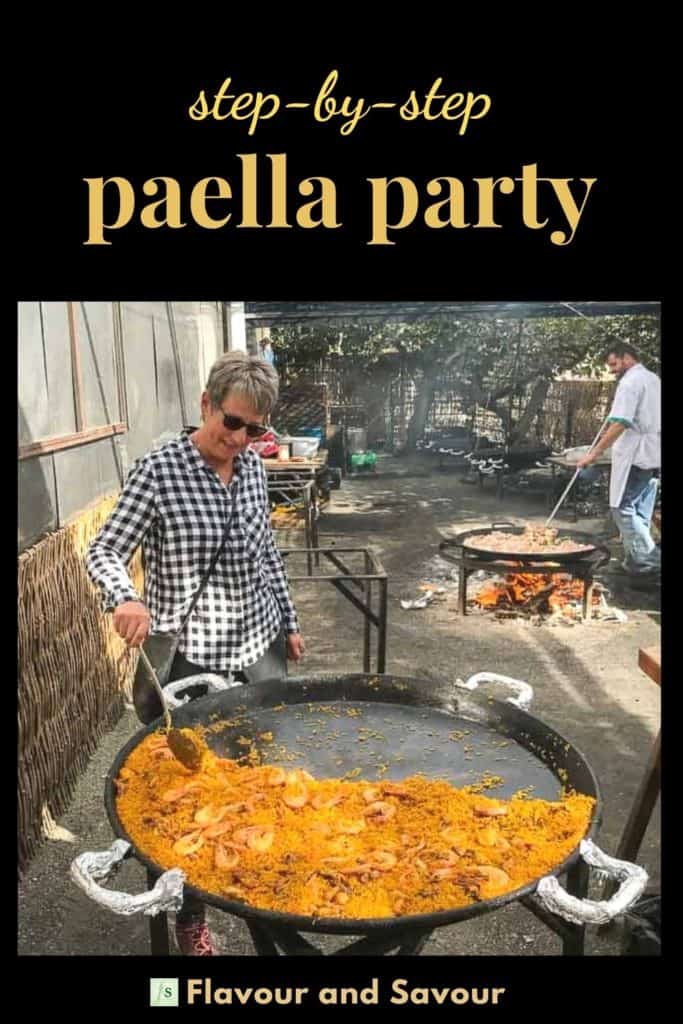 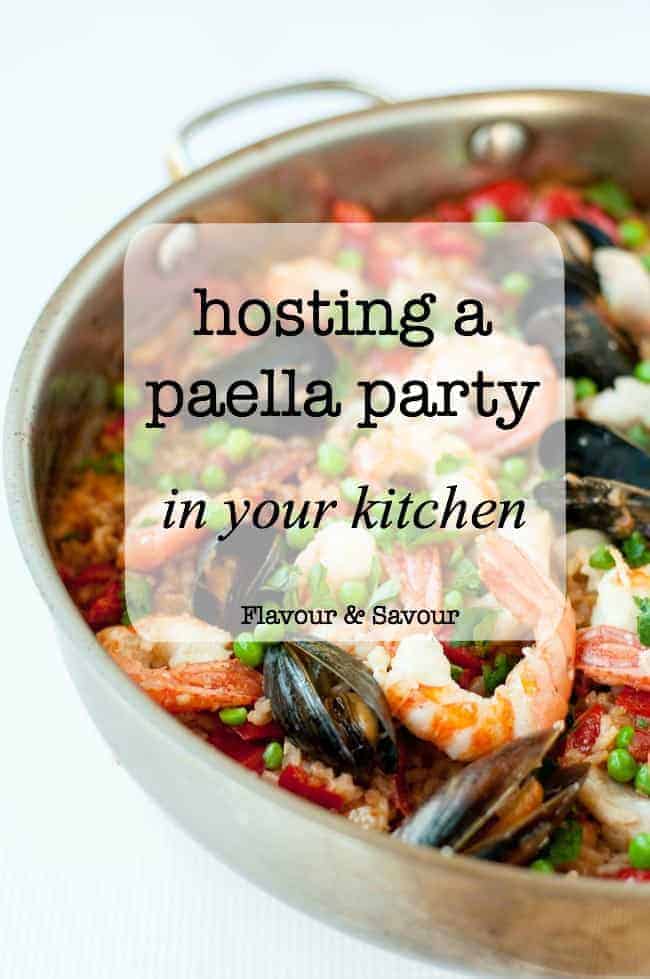 Create the festive atmosphere of an outdoor paella party and have just as much fun hosting an authentic paella party at home. Five helpful tips and step-by-step instructions for how to make Spanish paella!

Consider hosting a paella party in your kitchen!

But did you know you can make this classic Spanish specialty in your own kitchen in a skillet? While a traditional paella pan is nice to have, it's certainly not necessary. You can create the same festive atmosphere and have just as much fun with your guests by following these simple tips.

Read on for step-by-step instructions for how to make authentic paella!

Last year at this time, we were packing for a trip to Spain and Portugal, dreaming of pitchers of Sangria, tapa bars, seafood, sunshine and yes, paella! Like a true foodie, I had researched restaurants and fun places to eat. One of these was in Nerja, on the Costa del Sol.

Paella on the Beach

Ayo's Place is a beach bar on Burriana Beach, a 20-minute walk from the centre of Nerja and the Balcony of Europe. Just as the guide books told us, at 12:00 sharp, a pony-tailed man tossed some pallets in a heap and started a fire near the beach bar. He filled a huge paella pan with chicken, tomatoes, peppers, gallons of broth, saffron, rice, and stirred it all with a shovel.

Yes, you read that right!

It was fun to watch this man in action. He tossed extra pallets on the fire when needed, and finished off the paella by adding fresh prawns, clams, octopus and other seafood. With no announcement necessary, sunbathers (including Denis and I) left our beach loungers and lined up for this all-you-can-eat feast.

With a pitcher of Sangria, a plate piled high with paella, warm sunshine and my best friend to share it all with, I was in heaven.

How to make paella at home

But you don't need a trip to Spain to enjoy a feast like this. A stove, a skillet and some friends are the only essential ingredients for hosting a paella party. I've simplified the classic recipe and broken it down into five steps.

While it sounds like it might be complicated, it really isn't. Get your friends out of the living room and into the kitchen to help out. Make a big pitcher of Sangria to set the mood and have fun cooking together.

Check your pantry for these paella ingredients

Paella requires a few ingredients that might not be in your pantry.  Valencia or Bomba rice is necessary to make authentic paella. You can use Arborio if you can't find the first two.

You'll also need some saffron and Spanish smoked paprika if you don't have those in your spice cupboard already.

Check the ingredients listed below, choose the types of seafood that are available where you live, (or use chicken if you prefer) and get what you need to be sure you're completely organized before hosting a paella party.

Here is an overview of what you'll do. Detailed instructions are in the recipe below.

1. Make the sofrito. That's the Spanish name for the base made of onion, garlic, bay leaf, salt, peppers and tomatoes. Cook it slowly until it has the consistency of jam. You can make this the day before and refrigerate it if you like.

2. Cook the seafood. At this stage, you'll cook the fish, shrimp, lobster,  or whatever you're using, but not the mussels. Once cooked, you'll remove these from the pan and set aside.

3. Add the sofrito (onion-tomato mixture) and the rice, paprika and saffron, stir it around a little, then add the stock. Once it has boiled, add the mussels so they cook in the liquid. As soon as they've opened, remove and set aside.

4. Simmer the rice until almost tender, then put all the seafood back in the skillet.

5. Develop the socarrat. Continue to cook until the socarrat, a crunchy rice crust, forms on the bottom of the pan. Resist the urge to stir and just let it form. Garnish and serve!

2. Clean and de-beard the mussels. Watch this video for instructions.

3. Shell the prawns (if not done already) I like to leave the tails on, not just for looks, but because they add lots of flavour to the dish. You can certainly leave the entire shells on--it just makes for messy eating, but if your guests are okay with that, go for it.

4. Chop some herbs for garnish. 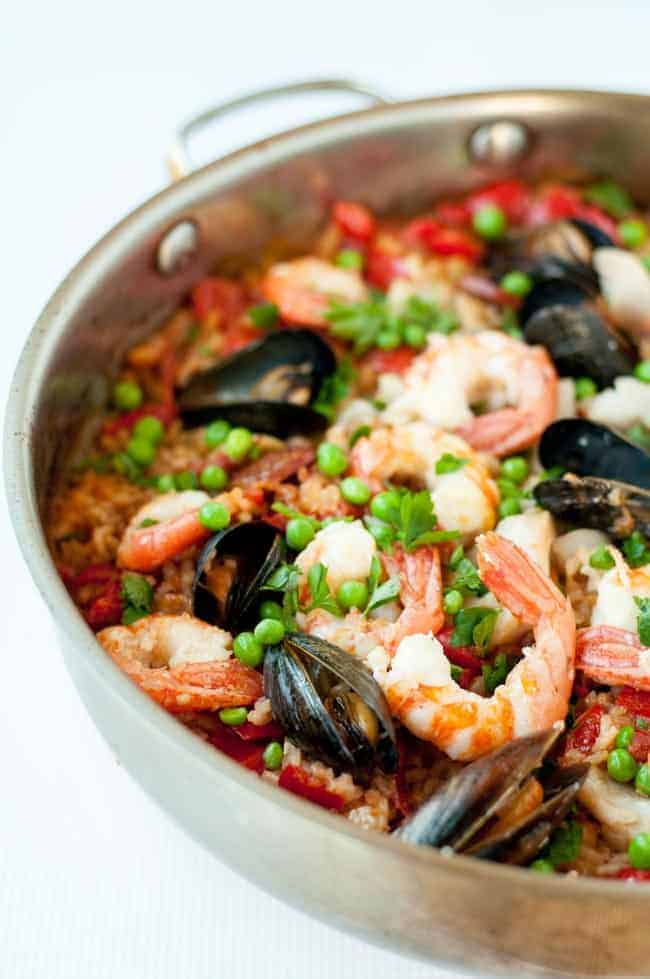 Start your paella night off with some traditional Spanish tapas! Try any of these mouth-watering tapas. 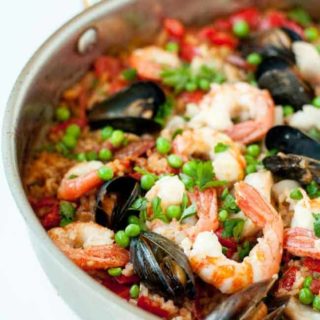 Hosting a Paella Party in Your Kitchen

This recipe makes enough for 4. If you double the recipe, use two skillets or a large paella pan.