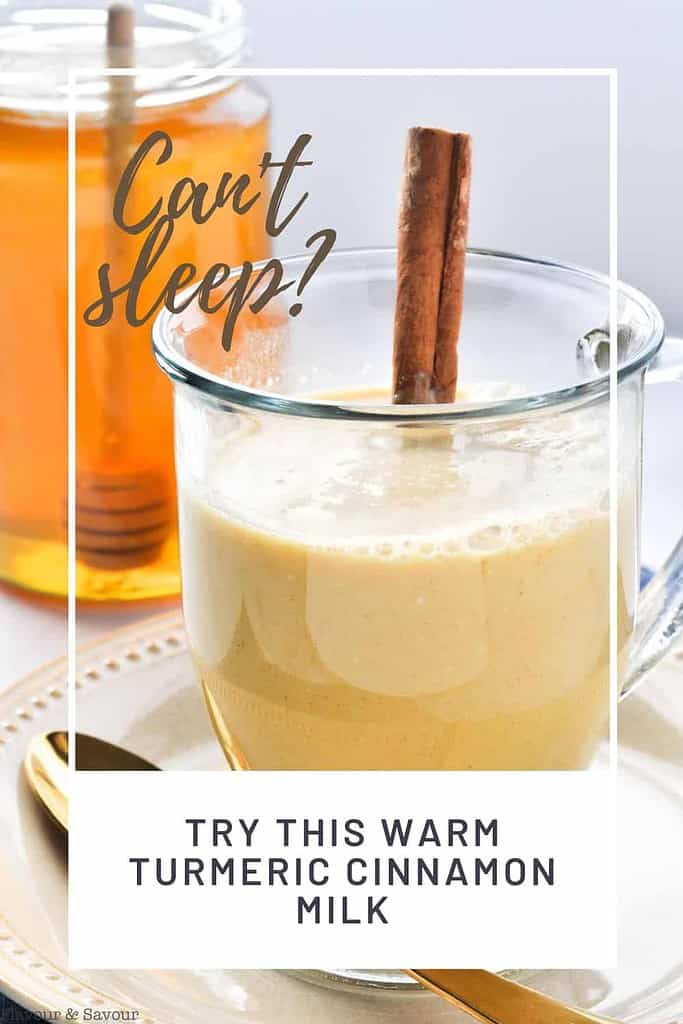 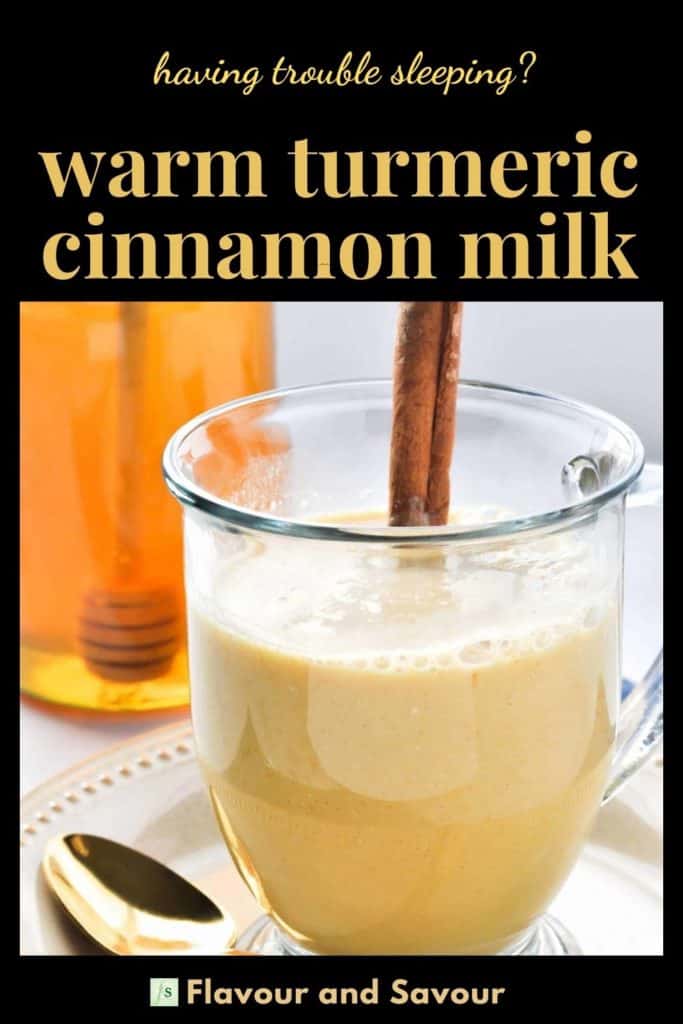 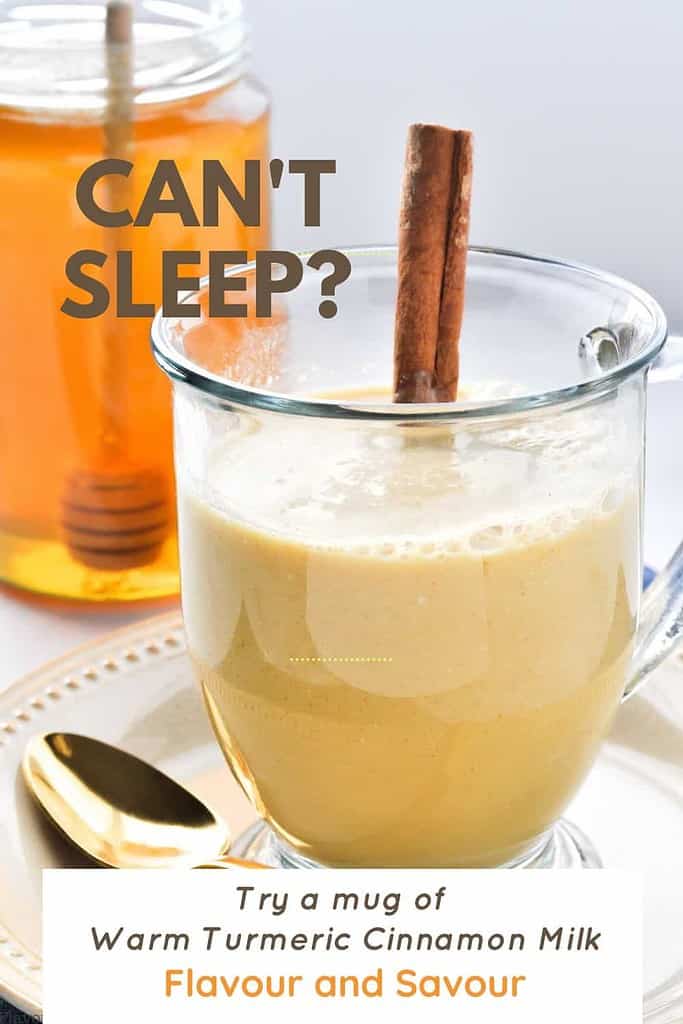 If you ever have trouble sleeping, try a mug of this Warm Cinnamon Turmeric Milk. This Golden Milk has amazing health benefits.

This Warm Turmeric Cinnamon Milk is smooth, sweet, and comforting. Sipping a warm mug of this "golden milk" is my favourite way to relax, not only because it is soothing, but because I know I am giving my body a healthy treat.

And while this warm cinnamon milk has amazing health benefits, here's another plus: it may help you sleep!

😴 A recipe for sleep

When I'm occasionally wandering the house at 3 a.m., I'll heat up a mug of this Golden Milk and be back to sleep in no time. It has a definite calming effect on me, allowing me to relax back into sleep.

To make one cup of turmeric cinnamon milk, here's what you'll need:

In a small saucepan, gently heat milk of your choice with honey and optional coconut oil over medium heat. Stir occasionally. Bring to the point just below a boil, when small bubbles form around the edge of the pan.

Remove from the heat and whisk in the spices until well blended. Let stand for a few minutes, then strain through a fine-mesh strainer, if desired. This step is optional. The spices that don't dissolve will settle to the bottom of your mug.

Add a cinnamon stick if you'd like, stir and sip!

If you have fresh ginger or fresh turmeric (and time) the flavour will be even more delicious. Use a microplane or fine grater to grate a little into the warm milk. The amount you use will depend on your preference. Start with a little and taste as you go. You can always add more.

Add a sprinkle of freshly ground black pepper (it may enhance the curcumin in turmeric) stir, and enjoy!

⏰Save time! Make a batch of turmeric spice mix.

Who has time to open all those little jars of ground spices and measure ingredients? Not me. Especially in the middle of the night!

After the first time I made this, I decided that once was enough, so I made a big batch and stored it in a small Mason jar. Now I just add a teaspoon of the powdered spice mix to my warm milk and honey.

Remember to add the black pepper just before serving. Pepper works hand in hand with curcumin, increasing your body's ability to absorb it.

Keep it keto:  Use Lacanto Monkfruit Sweetener with erythritol instead of honey. Use nut milk like almond, cashew or coconut milk.

Keep it paleo: Use honey or maple syrup and nut milk.

Keep it vegan: Use maple syrup and a plant-based milk.

Turmeric:  You may have heard claims that it is one of the "world's healthiest foods" and that it has amazing anti-inflammatory properties. Did you know that you've probably been eating it since you were a child?

Curcumin, the pigment that gives turmeric its bright yellow color, is an ingredient of the mustard you likely smeared on your hot dogs and hamburgers in the past.

Turmeric has been used in Indian cooking and medicine for hundreds of years and is a key ingredient in most curries. More recent research shows that it also has antioxidant, anti-cancer, anti-aging, anti-Alzheimer's, liver detox (the list goes on . . .) benefits. You can read 10 Proven Health Benefits of Turmeric here.

🎁 Give this turmeric spice mix as a gift!

Here's an idea for a gift for someone who might like this golden milk, too. Scoop equal amounts of the spices into a spice jar, add a cinnamon stick and a label with the recipe and give to an appreciative friend.

See those cute little recipe tags in the photo above? Here's my gift to you! Download and print these on card stock to make gift tags.
Click here for your printable Warm Turmeric Cinnamon Milk Spice Mix gift tags.

Make a commitment to include turmeric in your diet. Your body will thank you. Try these other healthy turmeric recipes, too!

Turmeric Pick-Me-Up: a turmeric tonic made with lemon, honey and ginger

Mango Turmeric Overnight Oats: a healthy start to your day!

7 Delicious Ways to Add Turmeric to your Diet: 7 turmeric recipes

If you liked this recipe, please leave a comment and a rating below. I'd love to hear how it turned out for you! Pin it and follow me on Pinterest for more tasty ideas. Subscribe to my weekly newsletter and never miss a recipe! 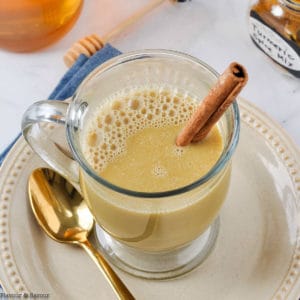